Cobwebs.  Now the cobwebs I'm referring too, have nothing to do with a cob as in, corn on the cob, a thickset, stocky, short-legged horse, a roundish lump of coal, or even a male swan.  Although, I've no doubt, that a male swan may well have its own web (webbed) site.  There are many definitions of cob to be found.  Some might even be slightly suggestive.  Anyway, I'm not going to get a 'cob on', over it. 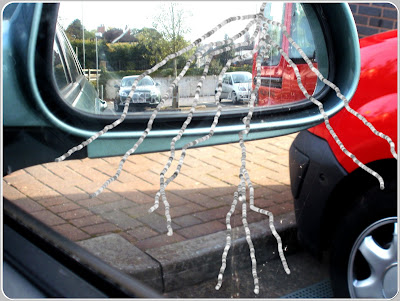 Of course, I'm referring to cobwebs or spider webs.  Have you ever noticed that your car can be nice and clean, except on the side mirrors?  You washed the car yesterday and it was spotless.  You go out the next morning and note the cobwebs on the side mirrors.  So, you remove the cobwebs.  You go back in the house.  Five minutes later, you decide you need to go back to your car.  And once again, there are cobwebs on your side mirrors.  Then you look at the row of cars on your street.  You notice that everyone of them has cobwebs on the side mirrors.  Out of frustration, you decide to wash your car again.  Five minutes later, the cobwebs have returned to your car's side mirrors.
So, I'm wondering if spiders are narcissistic?   Do they love to pose and admire themselves on your car's side mirrors?   Maybe it's posing, showing of its 'daddy long legs'.  Maybe, just maybe, it's a plot by spiders to piss us off.   You are driving along and realise that the cobwebs you forgot to clean off have caused you to not see the really angry cop who is trying to get you to pull over.
Then again, I've never actually seen a spider on the side mirror.  Only the cobwebs.  Oh how I wish to see a spider on a Fiat Spider.
If you had an ear of corn lying on a spider's web....would that be 'corn on the cobweb'? 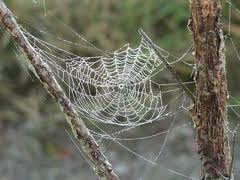 For your consideration.  Here's a web sight.  And yes, Spider-Man has his very own website.  You may have realised, if you actually read this posting, that I obviously need to 'clear away my cobwebs', have another cup of coffee and go outside, to yet again, clean off the cobwebs on my otherwise clean car.  That would be unless I mention the bird shit, but that's another story.....
Posted by klahanie at 01:08