I "Flu" Back From Vancouver.

I'm very sure you've been anxiously waiting for a post from me.  Thus, stay calm as I let you know that I'm not exactly well enough to do a blog post.  Typing this post is taking a lot of effort as you will begin to understand.

Oh yes, I left Vancouver at 7:00 P.M., Saturday, October 8.  I arrived just before noon, Sunday October 9, at Manchester airport wondering where the hell the weekend had gone.  I prepared myself for the jet lag.

The next few days and the jet lag kicked in, big time!  It seemed that my body was here but my mind was 8 time zones behind.

Still, I waited for the jet lag to subside only to then realise that I'd picked up a rather nasty flu bug that could be traced back to my time in Kelowna, British Columbia.  I worked that out because my friend, Heather, whom I'd being staying with in Kelowna, mentioned to me in a recent phone call that she was just getting over the flu.

Fantastic!  I travelled over 4500 miles, went back 8 time zones just to get some Canadian flu.  A bit of "eh fever", eh.

I also noticed about a week before the end of my trip to British Columbia that I had a lump growing on the bottom of my right elbow. It's called bursitis, aka "tennis elbow", although I didn't play any tennis.  Tennis elbow can be caused by a thump to the elbow, or can be caused by doing a repetitive motion. No, not that!

I have no idea how I got such a condition.  You will now further understand that typing this post is indeed taking a lot of effort.  Try typing when you've got a giant bollock flopping onto your keyboard.

I've been to the doctor's who has prescribed a course of anti-inflammatory drugs.  I'm hoping to see some improvement over the next few days,  If not, I have to go to Accident and Emergency to get the big elbow bollock popped.

So there it is.  I've got the flu, a "testicle" drooping down from my right elbow and a bit of lingering jet lag.

While I'm in what I hope is recovery mode, the comment section will be set to the off position on this post.  I really don't want to attempt to keep shoving my flopping ball sack off the keyboard.

Thanks and I hope you are well, eh. 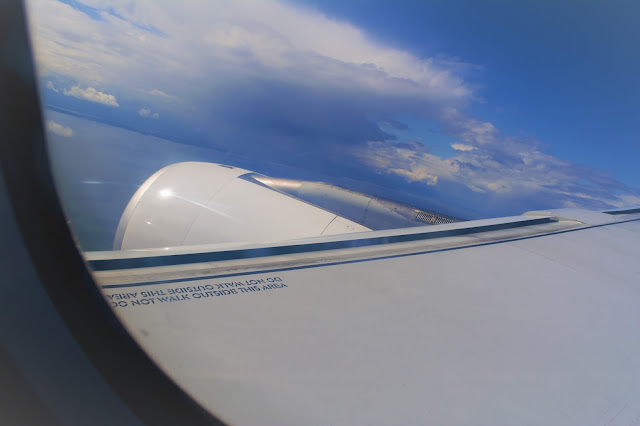 Here is the view out of the plane I flu, um, flew on.  Yes, a window seat with a view of the wing. Although, seeing the wing is reassuring, I was sort of hoping for a view of the scenery below, aka constant clouds.  Note what it states on the wing, " DO NOT WALK OUTSIDE THIS AREA".  A really good idea at 40,000 feet.....
Posted by klahanie at 21:55