Hatred Will Not Win.

You have witnessed and I have witnessed, the horror that hatred has done.  Lives have been lost. Hearts have been broken.  Our beleaguered, fragile planet has been tormented by those who would use the poison of hate to frighten us.

You will not succumb and I will not succumb, to the insidious epidemic of hate that causes havoc on a worldwide basis.  You have seen the awful events in Orlando.  You have seen the daily occurrences of the war-torn nations.  Humanity fleeing in a desperate attempt to live a life of freedom, of compassion, of love.  You will be aware of the murder of a member of the British Parliament, Jo Cox. A woman of peace who has left behind a husband, a son aged five, a daughter aged three, a mother, a father and a sister.

This has been a terribly sad time in the UK.  I have reflected on the cold-blooded, callous murder of Jo Cox and ask the question, "why?"

Since her murder last Thursday afternoon, I have felt a sense of humanity at its finest.  Those who have fought a ruthless battle during our European referendum campaign, have demonstrated that beyond the bitter politics, lies that loving sense that we must all be here for each other.

Britain weeps.  The world weeps.  In peaceful defiance, the world will embrace the ideals of love, not hate.  Hatred will not win.

Wednesday morning, May 18, 2016.  Destination, Dovedale, via Ilam, in the Peak District National Park.  Dovedale is about fifteen miles east of our starting point, Leek, Staffordshire. Whenever I see the road sign for "Ilam", I always think of eleven o'clock in the morning. Coincidentally, that's around the time we arrived at Ilam on our way to Dovedale.

This was going to be a three day camping adventure for my son, Tristan and his good friend, Dominic aka "Dom."  Tristan had suggested I take the shorter yet, oh so narrow, winding road via Ilam, to get to Dovedale.  A road so narrow that whenever a vehicle came the other way, I had to take evasive action, pull way wide to the edge and avoid upsetting the sheep.  I will refrain from any sheep jokes. 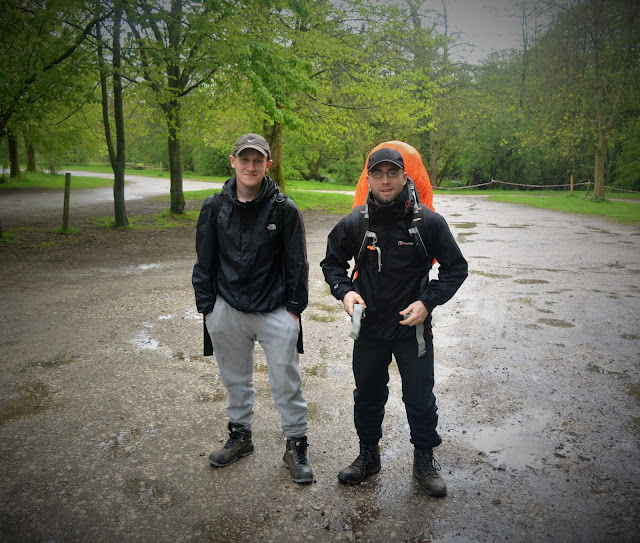 Here they are, all ready to go on their camping trip.  Dom is on the left and that makes Tristan on the right.  The photo was taking from a very wet Dovedale car park, which you might refer to as a parking lot.

Before leaving, I told them if they needed a ride back, I would come and get them.  They had planned walking the fifteen miles back to Leek.

As I headed back out of Dovedale, I decided to take the easier route back to Leek.  A road somewhat wider than the one we came in on.  Then I got to a crossroads.  One way indicated Ashbourne, Derbyshire, the other, Buxton, Derbyshire.  Knowing Buxton very well, I thought, what the heck, head towards Buxton for a different, scenic drive back.

Then it happened.  My very smooth running Chevrolet, suddenly became a violent, trembling beast of a car.  The car was shaking real bad and I heard a sound that made me feel like I was in the cab of a steam train.  Wasn't quite sure whether to apply the accelerator or look for some coal to shovel.  This went on for about five minutes.  Then the car ran smoothly for the next five minutes.  I was feeling somewhat panicky but I did maintain my composure.

The drive to Buxton seemed to take forever and then some.  The car continued with its five minutes of smooth driving and five minutes of living in an earthquake zone.  Buxton, where for art thou, Buxton.  Finally after about thirty minutes, I arrived in Buxton.

I knew that the journey from Buxton to Leek would require me driving the A53, one of the steepest stretches of road in the UK.  Predictably, as I headed up the steep road, my car started acting up again.  Somehow, I did continue to stay calm.  I visualised the end of the thirteen mile stretch that would get me to Leek and to a mechanic I trusted.

I explained the symptoms to the mechanic and I got my Chevrolet booked in for the next morning, Thursday morning.

After taking my car to the mechanics, I waited for the outcome.  Of course, my car needed one part and the part wasn't going to arrive until Friday morning.  The part, to bore you, was called a caliper, which is part of the braking system.  How odd that such weird happenings from my car could be related to the braking system.

On Friday morning, my phone rang.  It was my son asking me to come and get them.  At this point, I still didn't know if my car had been fixed.  I explained to my son what had happened to my car.  I told him I'd phone him back.  Luckily, the car was fixed.  Within the hour, I had paid for the repair and got the two dudes in what was now a very smooth running car.

I know, by my standards, I rambled on in this post.  To summarise, which is a good starting point for anybody who, heaven forbid, skims through my posts, all turned out well.   I stayed calm.  That, in itself, is a momentous step forward in my ongoing challenge of not allowing anxiety to overwhelm me.

As for Dom and Tristan, they had fun during three days of torrential rain.
Posted by klahanie at 01:32 104 comments:

Trying To Not Make A Brick Of Myself.

Bricking it for Canada

If you click on the link above, you will be taken to a map that shows a brick wall under construction along the Canadian border. 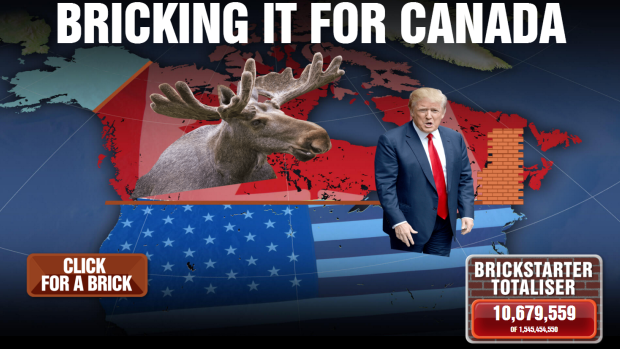 This is a photo of what you will see in the link.  Moose, sorry, bear in mind, that the brick wall has gone a considerable distance further west than in the picture you see.

Although the above video, courtesy of the British TV show, "The Last Leg.", hosted by an Australian, pleads with Canada to build a brick wall, I want to try and help any Americans wanting to still flee to Canada.  You're welcome, eh. 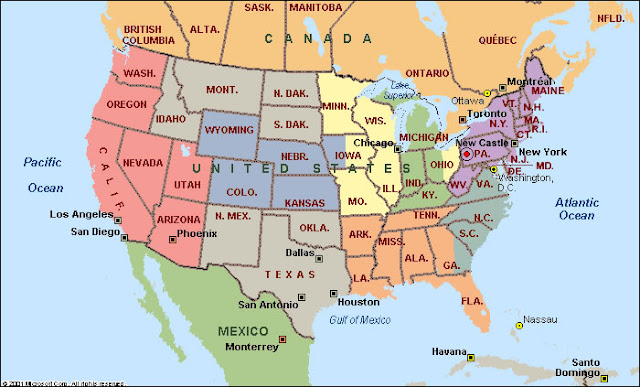 If you're an American and you wish to get the heck out and head north, you'd better hurry up because the wall is now around the Montana/Saskatchewan border.  If you live on the East Coast of the USA, pisser, because you've got some travelling west to do to still get across the border.  If you live in Alaska, you wont find any wall.

Upon arrival at the un-bricked portion of the border, you will be welcomed by a moose, a serenading Mountie, some hoser wearing a lumberjacket, a guy wearing a hockey uniform, Justin Bieber, Celine Dion, William Shatner, the band members from Rush, Michael J. Fox, Jim Carrey, Avril Lavigne, Shania Twain, Alanis Morrissette, Mike Myers, Dan Aykroyd, a beaver and Pamela Anderson handing out small samples of maple syrup.