The past four months have been four months of upheaval, turmoil, adventure and discovery.  I'm in my new home.  My son is in his new home.  Penny, a dog of such sensitive perception, shares both homes.

A new life has begun for my son, for Penny the lovable Jack Russell and myself.  I, a man coping and challenging every aspect of my low esteem caused by past environmental trauma.

Yes, the past four months brought on a deeply intense bout of depression.  The "inner critic" screamed, tormented me to the point I could barely sleep, barely eat.  I was sinking fast.  How was I going to cope? Would my son cope with his new responsibilities?   Would Penny be able to adjust?   Questions, concerns, whirled and whirled in my frazzled mind.  Something had to change.  It was time to battle against the inner critic.  I cannot give my depression permission to sabotage my right to a peaceful, hopeful life.

I learn from that past and embrace the now.  A new sense of excitement, of realistic, positive anticipation that all will be just fine. The inner critic has been replaced by the loving return of my "inner child."  An inquisitive child that sees the good in perceived bad moments.

The powerful revelations that lay within the four months of perplexity quashed the incessant chatter of the inner critic.  My upbeat attitude is returning with a sense of defiant triumph.

When my son lived with me, I hardly saw him.  Just a fleeting glimpse down the hallway as he headed to his bedroom.   I'd get the occasional grunt of acknowledgement from my son.  On a good day I'd get two grunts.  My son, Tristan, an angry, frustrated young man.  A young man craving independence and feeling trapped.  An angry, frustrated young man who would vent his seething rage directly at me.

That was then.  This is now.  My son is coping remarkably well as he sets out on his new life.  Of course, he gets incensed over the bureaucratic incompetence that transforms what should be simple situations into a surreal complexity.  I'm sure you know what I mean.

The anger my son has felt has dissipated.  The communication between the two of us has gone through a magical metamorphosis.

In fact, I'm seeing more of my son now than when we used to live together.  The common denominator is communication, cooperation, love.  And who is behind this new understanding of love I share with my son? Take a bow wow, Penny the Jack Russell dog and modest internet superstar!   Penny knew that she needed to see both of us together, all three of us together, as much as possible.  Penny, loving Penny, has taught my son and I valuable lessons.  Lessons that the purity of a dog's unconditional, non-judgemental love, is the bond that grows, that glows with the symbolic beacon of hope  for the future.

A magical metamorphosis.
Posted by klahanie at 00:19 83 comments:

The Love Of Me Bonds My Humans. 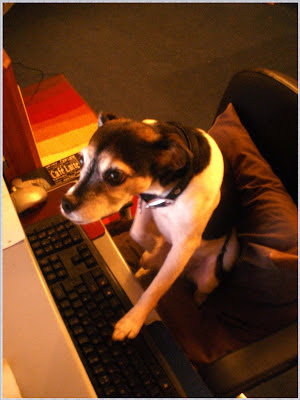 *Pawesome!  My arrangement with my human brother and my human dad is working better than even I'd dare dream....*  Oh hello, there.  I was just thinking out loud.  Yes, it's me, Penny the Jack Russell dog and modest internet superstar!

You might realise that my human brother, Tristan, my human dad, Gary and I, are going through some major changes in our lives.  Changes that caused me confusion and anxiety.  We moved from the home that we all lived together in for thirteen years.  I ended up staying with Gary for three months until Tristan finally moved into his own place.

When Tristan moved in and took me to live with him, I was spending long hours on my own while he was at work.  I didn't know this until he told me. What with being in yet another new environment and not being used to being alone, I started to cry. "Where is Tristan?  I'm really scared.  Where is dad?"

Tristan's neighbours expressed their concern about my crying.  With that, Tristan and Gary took immediate action.  We now have a compromise in place.  The routine is that I stay with Gary from Sunday evening until Thursday afternoon.  I'm now getting full attention from the both of them.  I'm so much calmer now.  I even roll around on the carpets, just like the good old days.

I understand that as part of Tristan's independence, he wanted me to stay with him for most of the time.  He now understands that I need the shared love of both him and dad. 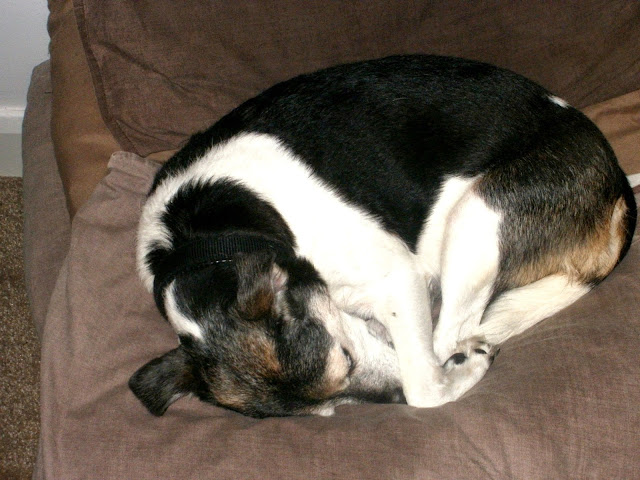 Lessons of love have been pawfoundly embraced.  *Pawesome!  My arrangement with my human brother and my human dad is working better than even I'd dare dream....*  Yes, when I was thinking out loud it meant this.  Tristan and Gary have bonded in a mutual determination that tells them their love for me is paramount.  Their love for each other has grown because of such mutual determination.  Such a magical, loving spirit of cooperation, of communication.  I want to cry but with tears of doggy joy. 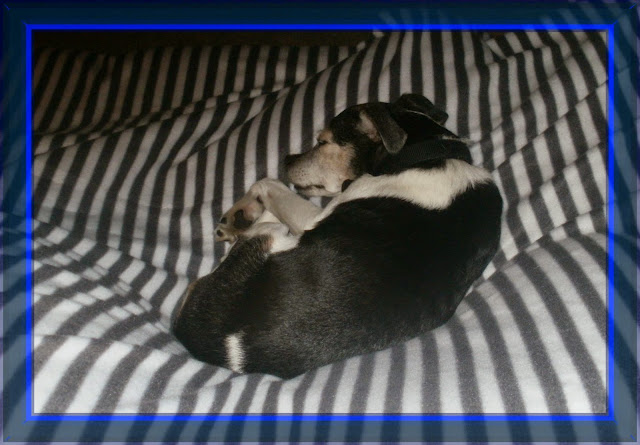 I sleep in peace.  I get to see both my human brother and my human dad on a regular basis. This week I'm staying with Tristan.  He was so worried about my life-changing experiences of late that he has taken the week off work.

Yes, there he is at twelve years old holding me as a two month old puppy.  Fourteen years on, the love I share with him, with my human dad, grows ever stronger.
Posted by klahanie at 03:21 140 comments: