Tonight, I watched an episode of the British version of 'Big Brother'.  You may have seen a version of this fascinating must see T.V. and realised that your life had little meaning before you viewed these highly talented collection of individuals posing on our television screens.
You may have realised that I was being ever so slightly sarcastic in the above sentence.  Yes, believe it or not, even I can be teeny weeny bit sarcastic.  This is the eleventh and apparently final series of the British adaptation of this intriguing show.  Gee, what a shame.  It originally started in Holland.  Why am I not surprised.
I have occasionally checked out the show and its cast of 'reality star' characters, since the very beginning.   I have yet to observe anyone with even a modicum of talent.  No, what you seem to get is a collection of 'wannabees' who are nothing more than cheap trash television.  So they get thousands of folks applying for these type of shows.  You would have reckoned that out of all those auditions, one person would have lived up to the hype preceding their entrance into the Big Brother house.  Alas, I have never noted this.
So, once again, this has got me to thinking.  Yes, I do sometimes think.  Why not a variation of the show with a group of diverse bloggers all vying to be the winner of 'Big Blogger'?  You could have the poetry blogger who entertains us with such immortal lines as, 'There was a young fella' named Skinner, who took a young lady to dinner, at quarter to nine, they began to dine, and quarter to ten it was inner, not Skinner, the dinner, Skinner was inner before the dinner.'   There would be, of course, the crude one-dimensional blogger.  The following is for documentary purpose only, and I would suggest you look away now, if you are easily offended.  The crude blogger is conversing,  with their fine command of the English language, to one of their fellow housemates, 'Hey fuck you!  I'm fucking awesome!  Now, stay away from my cornflakes, you slimebag!!'  You can come back now.  One of the housemates would be renowned for their deeply profound philosophical musings such as,  'If you were drowning in the negative sea of despair, some would throw you an anchor.  I would throw you a life jacket.'   Another of the Big Blogger housemates would be as highly amusing in the house as they are in the blogging world.  They would be amusing the other contestants with witty remarks such as, 'So this guy tells me his hobby is racing pigeons.  I asked him, So who wins?  You or the pigeons?'  Then you have the representative from the cynical bloggers.   Bloggers so cynical, they make 'Scrooge' and 'The Grinch', seem like really positive, upbeat kinda' guys.   Here is what the cynical blogger might say in the Big Blogger house, 'I have been told about this so-called non-profit charity that runs what's called a 'Cynic Clinic'.  There slogan is a 'detox for the disillusioned'.  Yeah right, non-profit, my ass, they are, without a doubt, a self-interest group raking in the big bucks!'
So how about it?  Do you reckon a television network would take us up on this?  Probably not because you guys are just too talented.  Whoops, did I go slightly cynical... 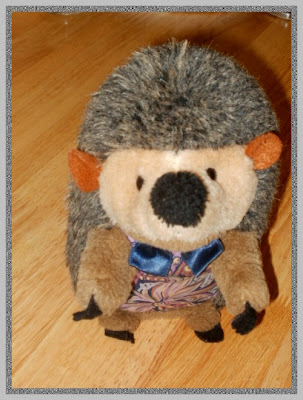 And speaking of Big Brother, a stuffed hedgehog has more life and personality than that collection of ridiculous wannabees.
'Klahanie, you have been evicted.  Please leave the Big Blogger house.
Posted by klahanie at 01:57