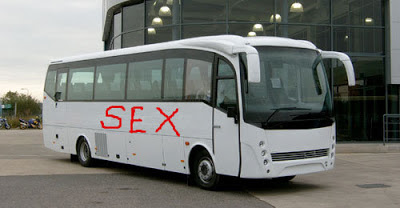 You might think of a "sex coach" as a bus full of footloose, fancy-free folks finding fun frolicking fondly  forwards fondling for flappy, floppy favours.  Sort of  like, "A Streetcar Named Desire", if you so desire. A coach full of wild folks doing the naked kinky conga down the aisle as the driver does her best to drive onwards and up the hill that is fast approaching.  No, the hill is not fast approaching.  The bus is fast approaching the hill.  So, stop having that pedantic thought.  Up the hill as the naked kinky conga slides down the aisle and knocks down the toilet door, startling the poor guy who is only trying to have a quiet dump. Well, that's not what I'm referring to.  Although I have ridden a Greyhound, but we wont talk about that.

No, I'm talking about an actual sex coach as in somebody who coaches you and your partner on how to have sex in a more fulfilling way. Yes, the sex coach gives you sex lessons.  How thoughtful of a sex coach standing at the end of your bed and encouraging you on.  You would be well advised to let your sex partner know that there is going to be a sex coach leering, sorry, observing the both of you from the end of your bed or whatever it is you're using.  And it would also be advisable to inform your partner that the sex coach charges $240 for a two hour coaching session.  I would also inform you that I charge half that amount.  Actually, I charge nothing.  Actually, I'll pay you to have me watch you, um coach you.
I leave you with some conga dancing, doggy style, um Pomeranian style.  "Ah Penny the Jack Russell dog and modest internet star!   I know, I know, you're enjoying this video!"