The following is another reposting that was originally published on Friday, 27 November, 2009.  I hope you enjoy this one and if you have read it before, enjoy it again.  And thank goodness, I've just sent of a huge pile of paperwork that has caused me so much stress. So, just for the 'halibut', here you are..... 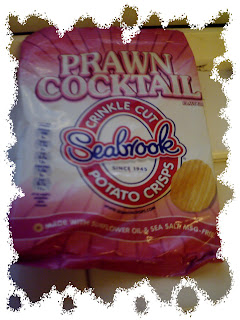 I keep hearing about folks searching for 'prawn on the internet'. I've really no idea what all the fuss is about. Something about soft prawn and hard prawn. Well, I don't know about that, but I've had a deep-fried prawn. Anyway, I didn't need to 'surf', or, for that matter, 'trawl' the internet, to find prawn. No, all I did was go into my local supermarket and found prawn hiding inside a bag of crisps (or "potato chips", if you are reading this from North America). Yeah, I know, the bag states it's, "Prawn Cocktail", and at this point, you might be thinking up some double meaning connotation.


A prawn is a crustacean. A crustacean is chiefly an aquatic creature. Typically, having their body covered with a hard shell or crust. One type of prawn is known as a "king" prawn. Contrary to what I'd believed was true, a king prawn is not in line for the throne of the British monarchy. Crabs are crustaceans. One type of crab is known as a "fiddler" crab. The fiddler crab, does not, as I was led to believe, play a small stringed instrument, or indeed, entertain the various sea creatures, with tunes from 'Fiddler on the Reef'. 'If I were a rich clam...' Lobsters are crustaceans. One type of lobster is named, "slipper" lobster. To this day, not one slipper lobster has been seen wearing slippers, smoking a pipe and sporting some tacky cardigan.

I wonder if a prawn has 'coral sex'? Do they do it 'atoll'? I wrote this story just for the 'krill' of it. I think I need 'kelp'. I know this posting was 'all at sea'. Yet somehow, it 'warmed the cockles of my heart'. No more fish puns because I'm beginning to 'flounder'. Right, that's enough, I'll 'clam' up now.
Posted by klahanie at 03:19

Email ThisBlogThis!Share to TwitterShare to FacebookShare to Pinterest
Labels: 'If I was a rich clam'