Today, we all reach the letter "M".  Yes, those of you doing the A to Z, we meet up.  Like passing letters on the alphabet sea, we pass by.  Like two ships passing in the night, the good ship "A to Z" passes the good ship, "Z to A."

Due to overwhelming demand, I have reposted this one from last year.  Okay, slight exaggeration.  A certain superstar dog, a confused hedgehog and a couple of garden gnomes, asked me to repost the following.

A number of folks assume that, "Metrosexual is a neologism derived from metropolitan and heterosexual, coined in 1994, describing a man (especially one living in an urban, post-industrial, capitalist culture) who spends a lot of time and money on shopping for his appearance."  Source: Wikipedia.
However, there is another meaning to Metrosexual that precedes the commonly regarded definition.  'Metrosexual' is a person who has a bizarre sexual fetish regarding public transport.  In particular, subway and underground systems with the name "Metro" in them.  There are plenty of examples of rapid transit systems that have the word Metro in them and you will note the Metrosexuals eagerly clambering onto them and finding the location with the most advantageous vibration.  My favourite Metro system has the intriguing name,  "Belo Horizonte Metro", which is located in Belo Horizonte, Brasil.
So, if you see somebody riding the Metro, who fondles the seats, insists on stroking the hanging overhead knobs, has a silly grin on their face and groans a lot, they may well be a Metrosexual   If someone gets on the London Underground and says they just love anything involving "The Tube", they may well be a Metrosexual.  If  you are talking to someone and they can't stop talking about their love of "BART" (Bay Area Rapid Transit), then indeed, they might just be a Metrosexual.  Metrosexual gives the name of that play, "A Streetcar Named Desire", a much deeper meaning. 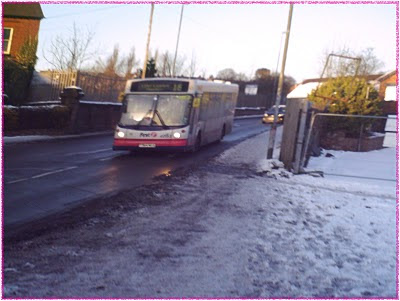 Okay, not exactly a Metro system, but a bus is a form of public transport.  This is the bus that goes to the big city from the little town I live in.  This can be a fun ride, as the roads are needing repair and those potholes can be an extra moment of Metrosexual joy.......

And to get it out of the way, there is neologism derived from Neapolitan and heterosexual.  Or "N" is for 'Neasexual'.  Neasexual is a bizarre sexual fetish regarding being covered in triple flavoured ice cream, whilst having an orgasm....

So there you go, if you're still contemplating an "N", I went forwards from backwards to give you an idea for an "N".
Posted by klahanie at 01:51

Email ThisBlogThis!Share to TwitterShare to FacebookShare to Pinterest
Labels: A to Z Blogging Challenge, The alphabet challenge