Okay, the posting below is a posting I've done before.  So, if by chance, you've read it before, perhaps doughnut or donut bother reading it again. 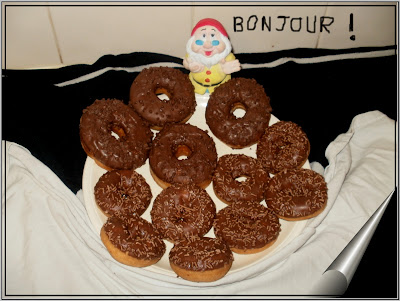 I remember my first year of high school.  I got to meet new students and become familiar with their special talents. Do I mean the guy in P.E. who won the one mile race, with the exception of that one time I, your typical geeky dude, decided to win the one mile race and really piss him off?  Ummm..no.   Do I mean the star of the grade eight basketball team?  No, again.  Maybe the guy who never lost a game in the after school chess club?  Wrong.  Or, perhaps the special talents of Nancy?  Well perhaps, "ah Nancy..'"  but nope, wrong again.

No, we're talking real talent.  Like those kids who could place their hand under their armpit and proceed to make this super exciting "farting" sound.  Or the guy who could pick his nose and flick the snot onto the blackboard, with amazing accuracy.  Did I have a special talent?  Glad you asked.  Well some might have thought that I was a very good class president and public speaker.  Yet my obvious gift was the fact I could place my index finger and middle finger together, blow through the crack and make a noise that sounded very much like a really juicy fart.  That's real talent and I know my English teacher was most impressed.

All these special talents, pale by comparison, to the fantastic gift this one guy had.  Ken had natural abilities that left me in awe and admiration.  Oh yeah, Ken could do the lesser accomplishments such as tooting a mean tune and leaving a vaporous, stench-filled cloud, wafting down the aisles.  However, his greatest and most cherished gift was his skill of "puking on demand."
Now a lot of us didn't like French class.  French class occurred right after lunch.  So during lunch we would collect enough money to purchase a dozen chocolate doughnuts for Ken.  Ken would gulp them down in rapid succession.  At the start of French class, a ghastly, curdling, vomiting noise, emanated from Ken's mouth.  Then it happened.  From the mouth of Ken spewed forth a great brown cascade of slimy, chocolatey goo, slithering and flowing down the aisle towards the front of the classroom and the shoes of the teacher.  "Je me sans malade!",  screamed the French teacher.  What she said, translated into English, is apparently, 'I feel sick!'
Some screamed and some laughed.  Yes me, and those in the know, laughed with hysterics.  The janitor was summoned and he proceeded to throw great lumps of sand on the offending heaving mass of puked-out chocolate doughnuts.  Due to the overwhelming, nostril hair burning stench, the classroom was evacuated.   Ooh la la! and magnifique!  We all headed back to the cafeteria and celebrated with some chocolate doughnuts.
One time in French class, I was given the great privilege of being "designated puker." I stuffed myself with chocolate doughnuts, willingly donated by my fellow, well-meaning classmates.  Sadly, although I gave a noble effort, my end result in chucking up, was nowhere near as profound and inspirational as Ken's mighty effort.  Ken is one of my true heroes.  I believe the guy should have received an award for actions, above and beyond the call of duty.
Posted by klahanie at 01:38