What Do We Blame For The Lack Of Flame? 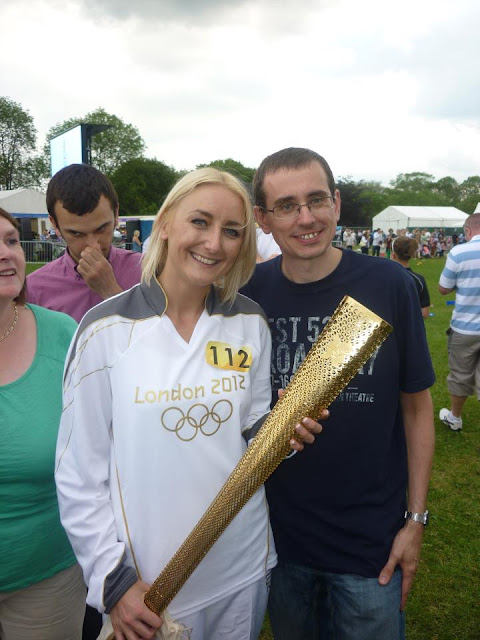 The above photo was taken at Hanley Park in Stoke on Trent, Staffordshire on Wednesday, May 30.  And yes, the big gold thing is not some sort of baseball bat, but actually is the Olympic Torch. The gentleman posing with the Olympic Torch is my good friend, Stephen.  Holding the Olympic Torch is Rhian Morley and she was one of the Torchbearers on the journey from Chester, Cheshire to Stoke on Trent, Staffordshire.  Rhian was given the opportunity to run with the Torch through Stafford, Staffordshire because, as stated by her nominator, "I cannot think of anyone more deserving.  Rhian regularly works with a local amateur theatre company outside of work, working with children from 4 upwards to adults.  Rhian has also done a number of things to raise money for a variety of charities over the last few years, including climbing Snowdon, running the race for life and the great north run and supporting team members through sponsorship drives.  More recently raising over £1000 for a member of retail staff who required a stairlift installed in his home to support his last few weeks as he was diagnosed with terminal cancer."
Okay, now back to the photo.  I know, you may have noticed that the flame has been extinguished.   I'm not exactly sure why.  However, there are at least two possible reasons as to why the flame is out.  Could it be that the guy standing behind Rhian and Stephen is holding his nose because the lady beside him passed wind and blew the flame out?  Or perhaps, due to safety reasons and the wafting flatulence, the flame was put out?  With such a potential explosive situation, I think it might well of been the latter.
If you so wish, further information about the Olympic Torch and the route it's going through Britain, can be found here:   Olympic Torch Relay Route
Posted by klahanie at 01:27