Briefly Back To The Seventies.

First of all, I would like to thank Fidelina, the beautiful fairy princess and Geoffrey the garden gnome, for kindly allowing me to repost their magical and oh so enchanting wedding.  I also wish to thank them for allowing me the exclusive photo rights and not giving into the monetary offers made by 'Better Gnomes and Gardens'.

I recently did a posting titled, Magical Macaroni Memories., where I mentioned how a box of macaroni cheese brought back thoughts of my youthful days of the seventies.  In that posting, I received a comment from Julie at the following site,  Empty Nest Insider .  Julie and I quote, noted the following, "I would love to see pictures of you from back then!"   Also had this comment from Dixie at, dcrelief , who stated, "Too bad you didn't post a photo of you and Rob, that would have been a blast from the past, eh?  Peach fuzz sideburns and all."  And who could forget Joylene's comment from over at this site, Joylene Nowell Butler, who recollected, "Oh Gary, I'm back there with you, only without the fuzzy sideburns."  Unfortunately, I have few photos to look through in regards to my days when I was young and part of the "disco inferno" that was sort of the seventies.  I could not find one of my dear buddy, Rob.
However, I did put up a photo of me that has caused a 'feverish frenzy' on 'Farcebook'.  Yes Farcebook, everyone's favourite social 'notworking' site.  So below here is a photo of me in 1974 at my parent's house in Vancouver.  I was a fairly fresh-faced twenty one year old dude. I am about to go to a wedding as the best man.  Which does make me wonder.  If I was the 'best man', why was she marrying him? 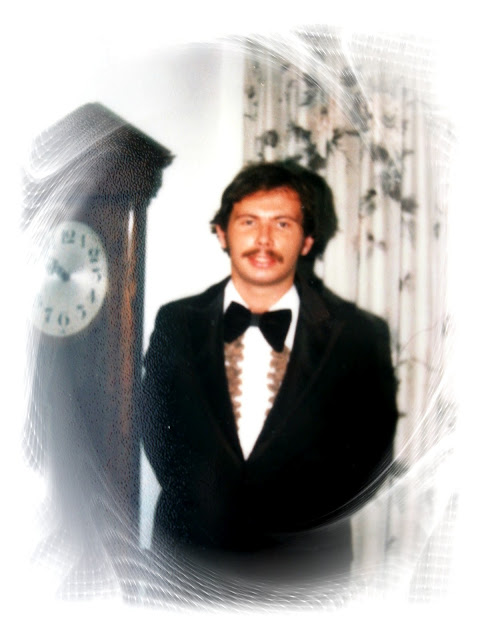 Yeah, I know!  Despite the fact I look like one of those guys from an X-rated seventies movie and had several dubious producers beg me to play a starring role amongst a star-'studded' cast, I refused.  Heck, I haven't even watched such a film, I state convincingly.
Posted by klahanie at 00:33

Email ThisBlogThis!Share to TwitterShare to FacebookShare to Pinterest
Labels: disco inferno, the seventies