The Originals Of The Species.

I have had the great honour 'honor' (take that spell check), to have had another award to add to my already bulging trophy cabinet.  You can think up your own innuendoes at this point.  Kelly at PSYCHO CARNIVAL  has very kindly bestowed the The Psycho Carnival Award for Originality upon my shy and humble self, the 'the wee folks' and of course, the pawesome, the pawsitive, Penny the Jack Russell dog and modest internet star!
First of all, I shall talk a tiny bit about Kelly.  Don't let the name of his site, 'Psycho Carnival', fool you into thinking that all his posts have to do with psychotic clowns, sex-crazed plastic dolls or puerile jokes about bodily functions such as cheek-clapping farts and 'butt gravy'.  Oh no, there is so much more to Kelly's site.  For he does variety that relates to several genres.  My good pal Kelly also does serious, thought provoking stories that show a transparent, deeply caring, sensitive side.  In fact, he would be a most worthy recipient of his own award.

Now then, briefly about me.  Right, that's it.


Anyway, there seems to be some kinda' rules n' stuff to go with accepting this here award.
First- Copy. paste and display the awards upon your blog, if you so desire.  Okay, at the bottom of this blog is all the stipulations


Second-  Second of all, I must pass on the award to some bloggers who I think are the very epitome of originality.

The Manic Chef   I have had the great delight in interacting with this new and very talented, original blogger. Please go over and say 'hi'.  If you don't, I shall  have a major temper tantrum, run down the street butt naked and scream obscenities to my startled neighbours.
Rantings of the Reckmonster   Okay, in fairness, half the time I have no idea what language Michelle, at this varied and original site, is writing in.  Luckily, I have managed to decipher her rantings, thanks to the 'urban dictionary'.  Seriously, she is witty, insightful and puts up some very thought provoking postings.  If you have not already done so, check her out.  Cause she's like totally awesome n' stuff eh!
The S.N.A.F.U. Report    Now this dude is very clever, very original and even does his own videos.  Please go check out 'The Wolf' at this site.  Besides he's Canadian and lives in Vancouver.  That's plenty reason to check him out.
Rot Du Jour    Sam, at her wonderful site, writes original postings.  Some sad, some very funny.  A most talented writer who has been missed from the blogging world.  I'm very pleased to see a recent posting from this delightful writer.


Third and Three Quarters-  Answer this important question:  Ketchup or Pygmies?
I know the answer that Kelly so kindly submitted on everyone's favourite 'notworking' site, 'Farcebook', or 'Fartbook', or 'Fakebook', so I must come up with, of course, an original answer.  Ketchup, obviously.  I mean, you try pouring Pygmies on the fries that came with your 'Happy Meal'.  That would be the same Happy Meal that didn't make you any happier and gives you this uncontrollable urge to sue the red-haired clown, with the big stupid grin, for misleading advertising.


Fourth- Write an original thought (or something that seems like a rare idea) or display a photo for everyone to stare at, in awe, that will cause the peeps to fall down upon their knees and smile with tears of profound realization. Or just say the first thing that comes to mind. 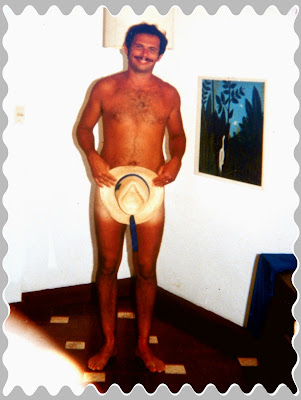 Wow and golly gosh.   I wonder who that awesome dude can be?   What?  That's Gary aka 'klahanie'!  And, before you ask, the blue dangly bit at the front of the hat, is a ribbon....


Fifth-  Give a link to the one who bestowed this award to you.  Okay, I did that right at the very beginning.  So, that's me, just about finished.


Congratulations to those I have passed this soon to be, much loved, much cherished, much sought after and coveted award.
Once again, I wish to thank Kelly at Psycho Carnival.   Many thanks and in my appreciation to him, I've posted him a sealed jar of Penny's finest farts.  Consider yourself honoured that Penny the Jack Russell dog and modest internet star, would go to so much effort for you, just for you, Kelly.


Below are the rules n' stuff.


First- Copy, paste and display these rules and this award upon your blog, if you so desire.

Second- Give this award to anyone who exemplifies originality, in some way, in their blog.
Third and Three Quarters- Answer this most important question: Ketchup or Pygmies?
Fourth- Write an original thought (or something that seems like a rare idea) or display a photo for everyone to stare at, in awe, that will cause the peeps to fall down upon their knees and smile with tears of profound realization. Or just say the first thing that comes to mind.
Fifth- Give a link to the one who bestowed the award to you.
Posted by klahanie at 22:39