Can't Fly With Me?

"AIRLINES could introduce adult-only flights after it was revealed kids are the biggest gripe among passengers. Almost 75% of business-class fliers were annoyed by unruly children and the sound of crying from economy class, a poll found. And 18% of those who had paid full price were annoyed to see economy passengers upgraded for free. Meanwhile, 15% said they wanted more privacy from those in the cheaper seats. Experts have suggested airlines should copy train “quiet zones” by introducing over-18 cabins or banning children altogether." (Source: Daily Mirror, February 2, 2011)
So, what do you reckon?  Would the banning of the little 'angels' be a good idea?  And, if so, why stop there?  I can see endless possibilities that cater to various interest groups. 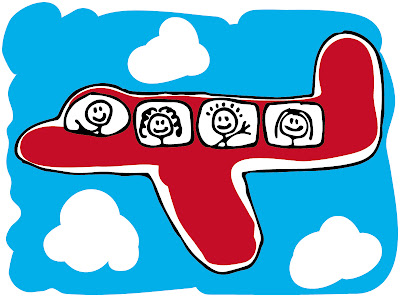 How about a kids only airline?  Yes indeed, I can see it starting in Britain and thus 'Bratannia Airlines' would pave the way for children only airlines, all over the world.  Bratannia Airlines would fly those adorable angels to kiddies only amusement parks, where the kids could scream, cause havoc, have temper tantrums, fling chocolate ice cream at each other and rub chewing gum on the seats of the roller coaster. 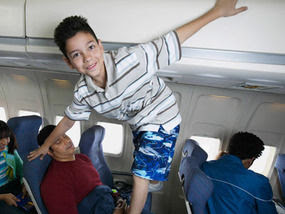 So, is the idea of adult only flights a good idea?   Do you shudder at the very idea of some obnoxious, snotty-nosed brat screaming in your ear, poking you in the ribs and spilling his can of fizzy pop on your best shirt that you had put on especially for Aunt Bessie, who you haven't seen in twenty two years?   Do you grimace in anticipation of one of those cute little kids waking you up, seconds after you finally got to sleep?  In fact, because you cannot concentrate on reading your Harlequin romance, do you suddenly think about a parachute and the exit door?
If this is what you visualise happening on your flight, maybe the idea of an adult only flight seems like a good idea.  That would be until you discover that the adult only flight is full of rowdy pissed up drunks who insist on singing football chants, while doing the naked kinky conga, down the aisle  Then the plane hits some turbulence and the entire naked kinky conga falls onto your lap.  Much to your horror, you are then overcome with the stench of alcohol, poor personal hygiene and the warm sensation of trickling vomit that has left a big yellow stain on the dress you paid a fortune for in a very exclusive shop in a fashionable section of London.
So, in the spirit of flights catering to special interest groups, how about the following suggestions?  Why not flights who specialise in flying those who think they are so much funnier than the rest of us?  So, that would be, 'Virgin on the Ridiculous' Airlines  How about an airline exclusively for folks who piss everyone off?  Thus, that would be, 'Wank Air'.  Or, what about an airline that caters to people who like to go to the same place, over and over again?  That would be, 'Air we go Again' Airlines.  And what about flights for folks who are going bald?  Yes, that would be named, 'Receding Hairlines'.    And yes, what about me coming up with some decent 'jokes'?
Hmmm....adult only flights and restaurants and movie theatres and libraries and yes please, adult only supermarkets.....
Posted by klahanie at 23:48